How to incorporate passive solar design in your building, using thermal mass and insulation.

Passive solar design can dramatically reduce our demands on fossil fuels and other forms of energy input, allowing our buildings to become producers and not consumers of energy and resources, supporting us in a healthier more comfortable abundant way.

Passive solar design is the starting point of sustainable building. Once one understands the basic principles of using the abundant natural renewable resources at our disposal we become more creative in our approach to design, more in tune and observant, reconnecting us with the natural rhythms that surround and sustain us, if only we would pay attention. Sustainable buildings save money, reduce your carbon footprint and provide a healthy living environment, transforming buildings from consumers of energy to producers and forging buildings that meet our needs.

From a permaculture perspective, incorporating these aspects into the design of your home are excellent examples of several permaculture design principles. To mention the most obvious: Observing and interacting with your environment to make the most of the sun’s migration, catching and storing energy, using and valuing renewable resources and services, integrating functions and elements rather than segregating them and obtaining a yield from the planet’s most abundant energy source, the sun.

Passive Solar Design uses the energy provided by the sun and stored in the earth. First we need to look at how this energy is utilized by defining insulation and thermal mass and then look at the strategies of how to incorporate them into our designs.

Generally the higher the density of a material (heavyweight) the higher its thermal mass, while materials with a lower density (lightweight) have a lower thermal mass.

Thermal conductivity or U-value (Thermal mass) is the measurement of conductivity of a material. It is measured in how many watts (measurement of energy per hour) per square meter it transmits, with a given input of energy, under standardized conditions. It is as expressed as Watts per meter squared Kelvin. (W/m2K). The lower the number the better the insulator, in comparison to the higher number the higher the thermal mass.

An example of how thermal mass (high rate of thermal conductivity) works for us, is when the sun strikes a mud-brick wall. The mud-brick captures some of this energy and warms the house by traveling through the wall and releasing it slowly into the building. This process can be timed to coincide with nightfall keeping the house warm during the night, leaving the wall cool by morning, ready for the cycle to repeat. The inverse is also true; internal mud-brick walls with a high thermal mass will, for example, help to regulate daily temperature fluctuations, since the thermal mass will capture and store the heat energy during the day when the internal air temperature is more than that of the mass, thus cooling the house, and begin releasing it the moment the air temperature is below that of the thermal mass, which can be vented at night when the outside temperature is cooler, helping to remove the stored energy from the mass. A lot of energy is required to change the temperature of high thermal mass materials, creating an energy storage opportunity.

The U-value (the ability of the material to transmit energy/ heat) of a straw-bale, 500mm thick, is 0.2 watts per meter square Kelvin, or U=0.2.

The U-value of a brick double cavity wall is U=1.6.

We can see that a solid brick wall transmits 10 x more heat energy than a straw-bale wall and a double brick cavity wall 8 x more.

Resistance to conductivity or R-value (insulation) of a material is a measurement of how much it resists the transmission of energy. R-values are harder to pin down as heat can be transmitted in 3 ways, conducted, radiated or convected. Tin foil may have a good R-value based on how much radiated heat energy it can reflect (resist), but will have a very high conductive R-value simply because tin has great conductivity. In this case, the higher the R-value the more heat energy it resists and the higher its insulation value.

An example of how insulating materials (low rate of thermal conductivity) can work for you is to simply look at a cooler box. If you place something cool in an insulated box, it stays cool just as it will keep warm things warm… by resisting the transmission of energy. But, how they resist may differ. Hot or cool boxes work in different ways. One way is to use reflective material that is good at resisting radiated energy, similar to a flask. A second way is with low conductivity, for example, a straw-bale house.

How the materials are installed to deal with the different ways heat is transmitted will greatly affect the R-values of the material. Hence we say a straw-bale has good insulating properties and the brick wall good thermal mass properties, even though they both have properties of each. It is important to understand that both thermal mass and insulation can be used to heat or cool a space. Most well designed houses using passive solar design will take advantage of both thermal mass and insulation to achieve a more constant comfortable living temperature.

(For our International readers, the use of the terms North and South is done from the perspective of the Southern hemisphere.)

Passive solar design involves the heating and cooling of a building without the use of mechanical devices or the inputs of fossil fuels. It uses components of the building, roof, windows, walls and floors to insulate, collect and store energy amongst other targeted strategies, such as, the use of geothermal energy or the use of water to capture store or disperse energy. Incorporating thermal mass and insulation value in your passive solar design will make your home an energy producer, and less of an energy consumer.

Buildings in the Southern hemisphere should be built facing north and typically developed along an east west axis to take advantage of solar gain. A roof overhang that allows in winter sun but prevents summer radiation is an additional strategy. Buildings and rooms such as sun rooms, solariums and greenhouses take advantage of direct solar gain, attaching these buildings to the North of your house to take advantage of their design elements will add to the performance of your home.

A mud brick wall being struck by the sun will capture the energy. Over time, the energy will move through the wall, from a warmer surface to a cooler one. A roof overhang can prevent the summer sun from heating the home, while allowing the lower winter sun to hit the wall.

Isolated solar gain (convection): Passively move energy from one part of the building to another using air or a fluid, such as water.

An example of isolated solar gain is moving the warm air from a North-facing solarium deeper into the building through the use of a solar chimney. On the South side, Cool earth tunnels may be used to move cooler air underground, further cooling the air into the building. This can be used in conjunction with evaporative cooling to great effect.

In colder climates, the movement of fluid from under the ground in pipes, making use of geothermal energy, is a cost effective strategy that uses thermo-siphon to passively circulate the stored ground energy through the building, often in floors with high thermal mass. 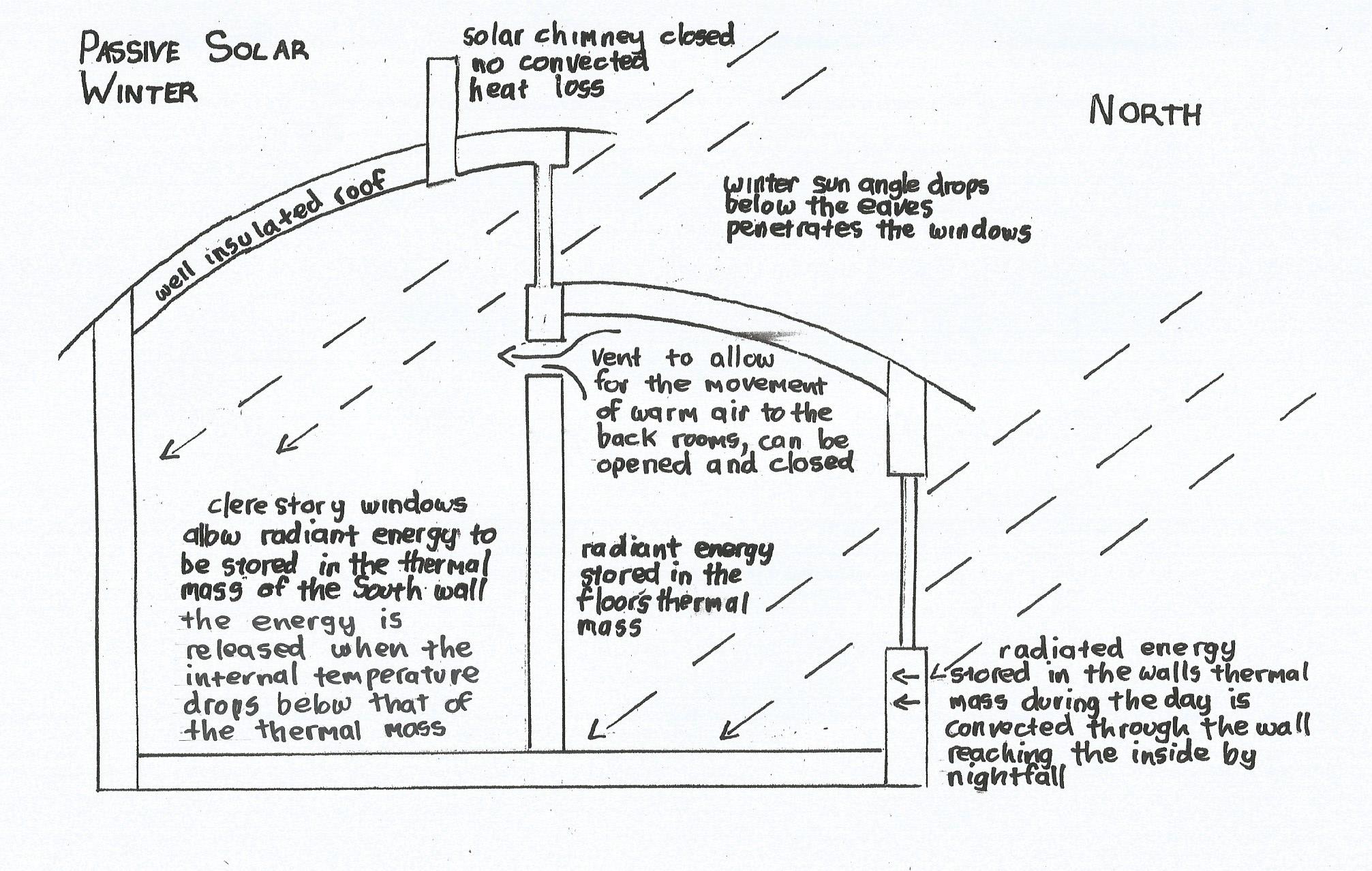 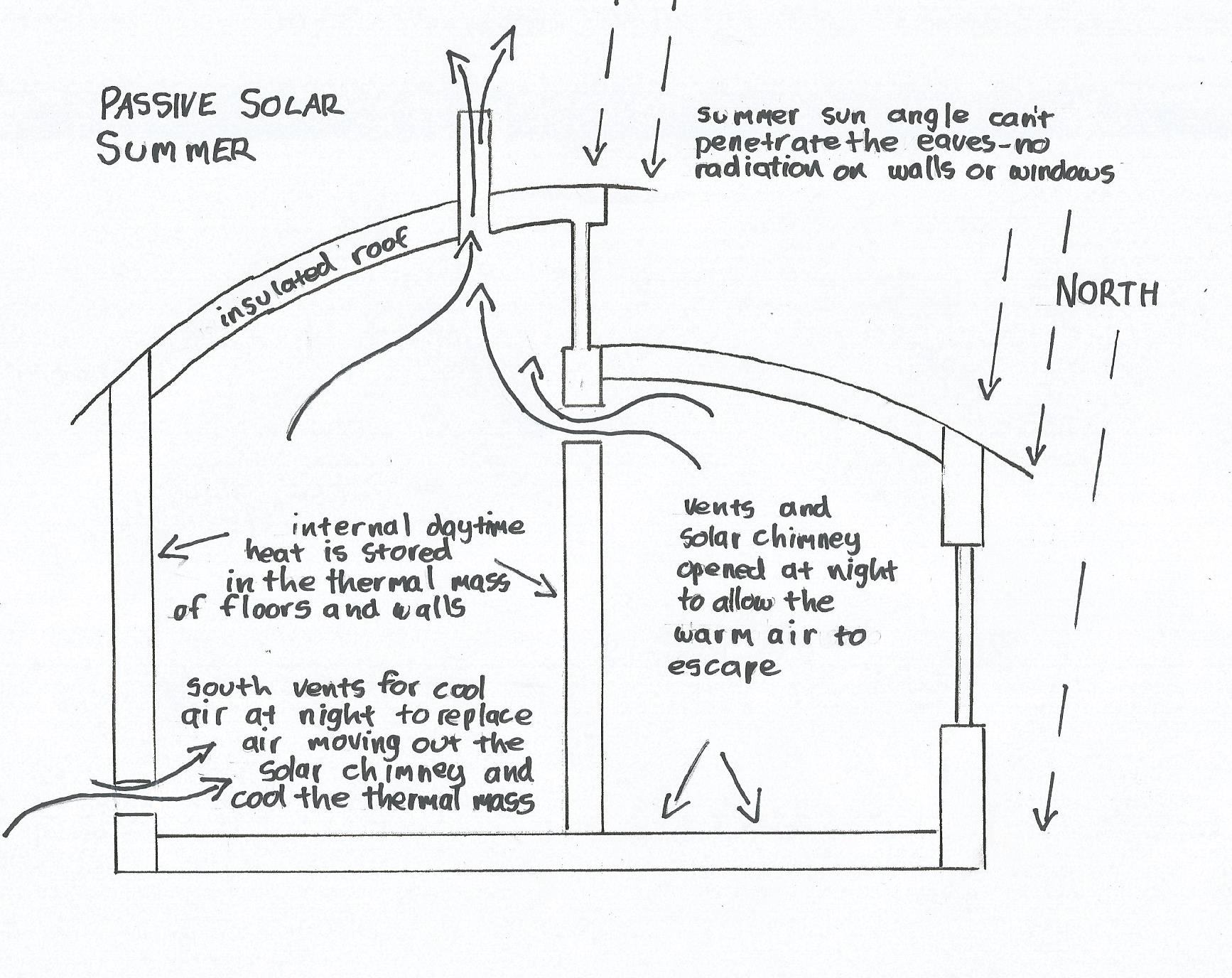 When it comes to passive solar, it is how you use and place materials in a design that determine how they will work for you. The layout in a house needs to be given careful consideration. While people will all differ on a design to suit their needs it is generally accepted that the main living space faces North to take advantage of light and solar gain; while the kitchen is on the East to make the best use of the early morning sun; bedrooms and bathrooms are generally tucked away to the South or West as they are occupied either less frequently or at night. A pantry would be on the South to take advantage of the cooler temperatures. I have found that both Feng Shui and Geomancy concur.

The use of different materials may also be reflected by the aspect of the house. Where one can control the sun striking walls on the North, high thermal mass such as mud-brick makes sense. On the South and West, where you have the most cold and uncontrolled heat gain, insulating materials such as straw-bales come into their own. Roofs need to be well insulated, windows and doors well sealed (no double glazing where I live, would be effective but expensive, if I pay attention to all the other details I can get away with it), and depending on your climate, there is little point in having straw-bale walls if you do not match the insulation in the roof.

Plants are also an effective strategy to incorporate into your design, and there are countless ways to do so. A few examples include, deciduous trees can be planted on the west to shade the house in summer and but allow in winter sun; grapes could be used to the same effect on verandas; planting dense vegetation on the south side creates an opportunity to draw the resulting cooler air into the building.

In conclusion, effective use of Passive solar design can dramatically reduce our demands on fossil fuels and other forms of energy input such as wood and when combined with other systems such as solar energy, solar hot water collectors, rainwater harvesting, composting toilets, bio-gas digesters and grey water systems our buildings become producers and not consumers of energy and resources, often producing more than they consume and supporting us in a healthier more comfortable abundant way.