Take charge of your power needs, Part 2: How to design your own off-grid solar energy system

As the cost of power continues to rise and the cost of solar energy continues to drop, going off grid has never been easier. Learn how to calculate your energy requirements, as well as choose an inverter, batteries and solar panels to suit your needs.

Please note in order to make sense of this blog post you need to read Part 1: Solar energy as an alternative to centralized power systems. 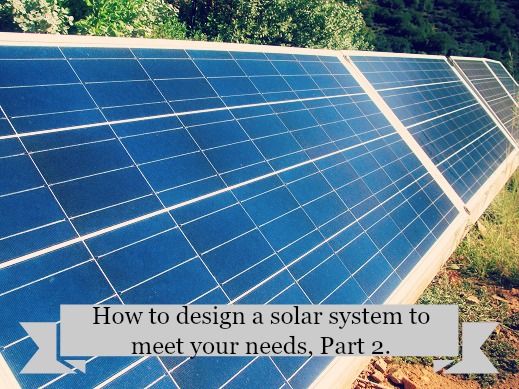 As we’re heading into winter South Africa’s continued loadshedding will have an even greater affect at home and work as people spend more time indoors requiring amongst other things more lighting as well as heating. We are blessed with abundant sunny days making solar very reliable without the need for a lot of backup storage in the form of batteries. If you are considering going off the grid, whether partially or fully, my previous post will give you a basic understanding of how solar energy works and the components of the system. In this post, I show you how to calculate your energy requirements, as well as choose an inverter, batteries and solar panels to suit your needs.

When designing your own solar system you first need to understand what your needs and wants are and re-evaluate appliances that consume a lot of energy. Often this is just a matter of swapping inefficient technology for efficient. For example, your old desktop computer may just need to find a new home or get recycled because the savings in energy are just so great when you use a laptop, 300 watts as opposed to 75 watts. As it’s the appliances that generate heat that use the most energy it is worth investing in a solar geyser and using gas as a cooking method. However, there are other ways of saving energy with these appliances, such as turning your geyser off when not in use; boiling the kettle once a day and filling a flask; using a solar oven, hot box or wonder bag. These seemingly small decisions add up one-by-one to create a far more manageable outcome. 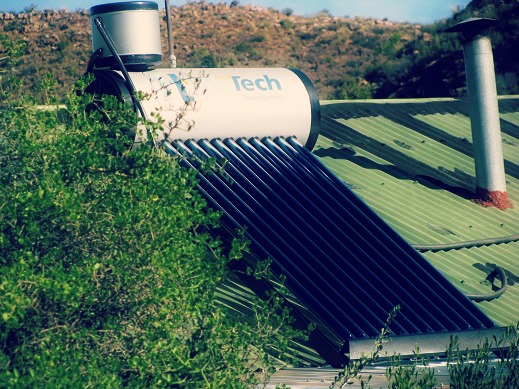 Following on from the first article in the series we see that it is watts that do the work. The simple equation to keep in mind is volts x amps = watts. Watts are a measurement of energy used in one hour, so if you want to calculate watts used in one day you need to multiply the watts by the number of hours or part thereof.

The list below is an example of how to calculate this:

The list above does not include items like a stove/oven, for which you can use gas or wood, a solar geyser which is independent of your system and other items that many households do include. Other items to consider may include tools, perhaps a TV and the like, but the list is fine for learning the approach. Every home will be different, much the same as the people they house.

How to choose the right inverter?

Inverters, much like cars, won’t last if pushed to the max. For example, your manufacturer may tell you that the car can go 220 km per hour, but you know that if you drove at that speed all the time your car would not last very long. An inverter pushed to its rated limit will also suffer failure in the short term. So it is better to have an inverter that has excess capacity for those occasions you need it, rather than use it to its max.

Let us assume that you will need to run the washing machine, the fridge and two laptops at the same time, however you never use the kitchen appliances at the same time as the washing machine in order to keep the system needs lower. Also the lights, flood lights, internet and phone charger are on a separate 12 volt system. This means that out of a potential 1162 watts per hour, you will need to only plan for a max of 780 watts per hour. So a 1000 watt (1KW) inverter should be fine as the max draw will be below 780 watts. However, as each individual and how they choose to manage their available power is different, these numbers could change. Someone might like to add the kitchen appliances at the same time, then your consumption would rise to 1380 watts per hour in which case you would need a larger inverter, say 1500 watts. Conversely others would be willing to turn the laptops off while they run the washing machine or kitchen appliances, or run the laptops on their batteries; then their max consumption would drop to 460 watts per hour and they would be able to use a 600 watt inverter. So the biggest implication, between a system where everything is on at 1500 watts, versus a system that is more managed at 600 watts, is the cost.

A couple more points to keep in mind is that the larger the inverter the more power it consumes. For example, a 3 KW inverter consumes 90 watts, as much as three lightbulbs, while a 600 watt inverter consumes around 15 watts. This is a good reason to not run your lighting off an inverter. You will also need to choose between a pure sine wave, square wave or step wave inverter (see Part 1.); the sine wave being best for your electrical equipment but also the most expensive. Please note, that some electrical equipment may be rated at a particular wattage, but require more than double that on start-up. Thus, you need to ensure that any appliance you plug into your system requires fewer watts than your inverter is rated to support, although some more robust inverters are designed to handle these large start-up draws for a few seconds;that is all that is required. Technology is moving fast to improve this type of equipment and reduce its cost.

How to decide on a voltage for your system?

Typical voltage systems for solar are 12, 24 or 48 volts; 36 volt has to a large extent been phased out. One of the advantages of a higher voltage system is that there is less power loss over distance. As the table below indicates power loss can be significant over distance, but can be minimized by installing thicker wiring, at a cost. Higher watts will require thicker wires when using lower volt systems to overcome resistance. For example a 5 amp wire will be able to do 60 watts of work at 12 volts and the same wire 240 watts of work at 48 volts before the wire overheats due to resistance. This is a common cause of fires in low volt systems as the wires become overloaded. Care must be taken to calculate the load on each wire so that you do not exceed its rated max.

In contrast, an advantage of lower voltage systems is the lower expense and the fact that more applications can be run directly off them. For example, car batteries are 12 volt so there are many applications designed for this voltage from radios to cell phone chargers, wireless internet routers, computers with adaptors and lighting.

What often happens with the voltage choice is that systems start small and inexpensive, to which 12 volts fits the bill, the system then expands as needs grow and finances allow, but tend to remain at 12 volts as it is costly to make a change. So thought needs to be given in planning for the future. It is worth noting that 12 volt lighting is well developed and is a compelling reason to go this route however they are also available in 24 and 48 volts, at a cost.

What is the right size battery bank?

This is very subjective and will differ from person to person and depends greatly on the weather in your area. It also needs to be kept in mind that solar panels do now charge in cloudy weather, just a whole lot less. Clearly if you hardly ever see a cloud and your daylight is reasonably long then having a large reserve is not necessary. However this is seldom the case. Where I live it would be very unusual to have more than 3 consecutive cloudy days so I don’t need to design beyond those limits. I am also okay with conserving a little power when there is no sun, i.e. not using the washing machine. But, it is not an option for the lighting or the internet to go down as well as laptop charging and other communication systems.

If we were to look at the total consumed in one day and wanted a three day backup you would need useable battery storage of 3588 watts per day, or 10764 watts total.

Drop the washing machine and the kitchen appliances when it’s cloudy and the equation changes to 10 batteries. (However if you bear in mind that the batteries will receive some charge from the panels I would think 8 would be plenty and you can use the blender for a bit.)

It is important to note that batteries will last longer if they are discharged less. Therefore a larger battery bank will help with a longer lifespan as long as the batteries can be efficiently recharged by the panels.

How many watts do you need from your solar panels?

There are several ways to approach working out the needs of each element of the system. If one works out the battery capacity first then this quick calculation helps. For every 105 amp hour battery you add 100 watts of solar panels. So if we use the example above of eight batteries you will need 800 watts. The total energy per day that you will receive if the panels are charging at full charge for 8 hours is 6400. This is just less than double your daily use of 3588 watts. Firstly this means that your batteries will almost always receive a full charge every day, which will keep your batteries healthy and therefore the entire system functioning well. Secondly, if the sun is shining you will receive 800 watts of energy, more than the 780 watts of your max draw, so if you time your max use to these periods i.e. full sun, then your batteries are not being drained at all, further extending their lifespan.

Remember, the solar panels will be wired to match your chosen voltage and they typically come in 12 volts, although other voltages are available. Also, choose a regulator that has sufficient capacity for the growth of the system and if you can afford it always use an MPPT regulator. (See Part 1)

In conclusion, there is very little reason why at least some of your energy needs cannot be provided by the sun. As the cost of power continues to rise so the cost of solar energy continues to drop. This trend will only continue and it has already reached the point where there is parity, especially if you are fortunate enough to be near a grid where you can sell energy back to the utility. Solar geysers are a good place to start as they stand alone and make an immediate impact. Its often the initial outlay cost of conversion that leads to no action, but the approach can be phased so as to minimise the impact and the system can be designed to allow for good management and plenty of growth.