The foundation of your natural building needs to be well-considered as the integrity of your building rests here. Decisions you make about your foundation depend on the materials you have available, the type of ground you have to build on and what carbon footprint you want to leave. The goal should be to create foundations that are hard enough, move uniformly and resist cracking for the walls above it.

Foundations for conventional building have, to a large extent, a one size fits all approach regardless of the type of ground you are building on i.e. a concrete and steel foundation that works equally well on all types of earth and varies only slightly in its design. It requires little thought and has been proven to be effective. The cement in concrete provides the compressive strength, and the steel tensile strength to resist cracking. It does however come at a cost to both your pocket and the environment.

When building with earth your foundation needs to be well considered as the integrity of your building rests here. Decisions you make about your foundation depend on the materials you have available, the type of ground you have to build on and what carbon footprint you want to leave. The goal should be to create foundations that are hard enough, move uniformly and resist cracking for the walls above it. Foundations will always have a higher Mpa value than the walls, however it does not need to be excessive. A 4 Mpa foundation is sufficient for a 1.6 Mpa mud-brick wall, which most types of foundations are suitable for. Furthermore, if after levelling the site the undisturbed earth is hard enough, foundations may well be unnecessary.

There are several strategies for foundations depending on the type of ground that you are building on. In this blog post, I discuss the four types of ground, (1) uniformly hard, (2) uniformly soft, (3) hard and soft, and (4) clay, their challenges and several strategies you may incorporate into your design. The discussion is quite technical in some areas so I recommend that you read my three-part series on understanding earth first.

Before the advent of concrete that is able to go harder still, it was common in older buildings that still stand today, for there to be no foundations, should the earth be uniformly hard. The logic being, why disturb hard earth only to replace it with something that may in any event be not quite as hard and make a lot more work. The strategy was to carefully level the earth just below ground level, 100 mm or so, taking care to not disturb any deeper earth and then to build directly upon it.

When your ground is uniformly hard you probably have the best and easiest ground to build on as the earth is hard and not prone to movement after rains. Foundations in this context are not always necessary, it may be that you are building directly onto rock, or that the earth is very compact and hard. In this instance, no further prep work needs to be done to the site and standard foundations can be dug. While foundations may vary depending on the design of the building a guide for standard foundations could be described as being 250 mm deep, 500 mm wide and stopping 100 mm below the natural ground level. 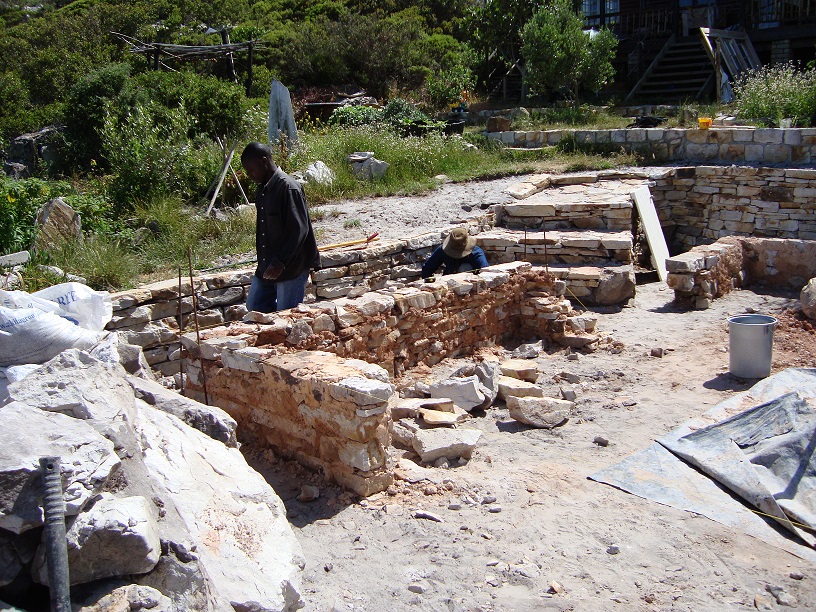 There are no foundations here because it was built on a rock shelf and the rocks for the stem walls and walls came from the plinth on which it is built. Scarborough, Cape Peninsula

Foundations in conventional buildings are commonly specified at 25 Mpa and the walls above may well be around 14 Mpa in the case of clay fired bricks. We now know it is unnecessary on uniformly hard earth for buildings, no more than two stories high, to have foundations harder than 4 Mpa, and certainly not if you are building with earth and your walls are only 1.6 Mpa. A 1.6 Mpa wall on foundations that are 25 Mpa is pointless and is likely wasteful. 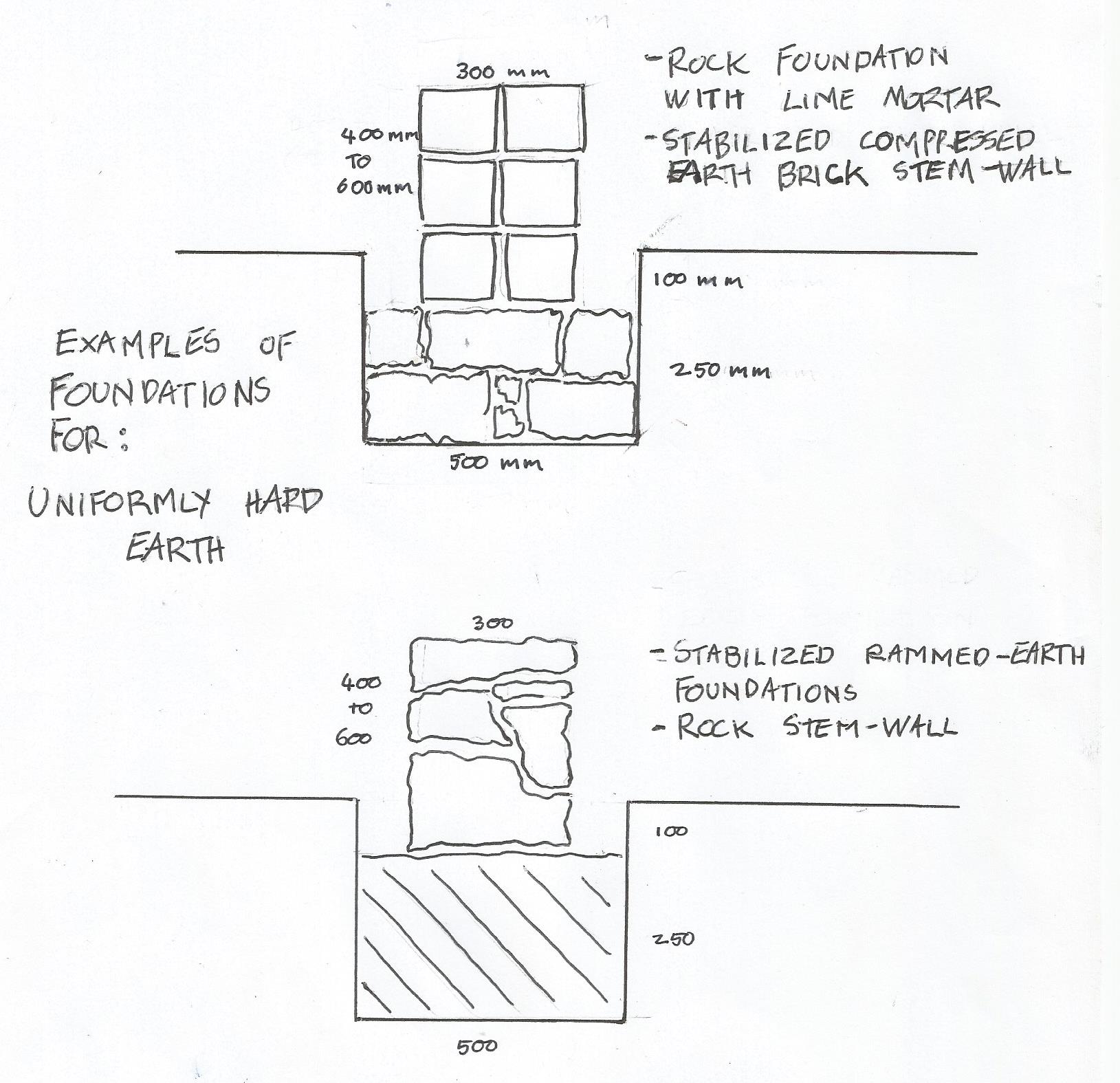 An example of uniformly soft earth is sand. Despite what we may have heard sand is not the worst thing to build on; it does not swell with rains and is well drained, two good attributes. Its main drawback however is that a heavy load will cause the building to sink as the material slowly compacts over time. It is not a problem if a building’s foundations move, so long as they move together and one area is not left behind to crack off, resulting in damage to the walls above. It is common for buildings built on sand to settle over time. Larger buildings will need to be built with this in mind and designed so that should different parts of the building settle at different rates the integrity of the building is not compromised.

The most common strategy to deal with this is to spread the load over a wider a surface area – the foundations tend to be wider and deeper. Going deeper helps to find more compacted earth and the width helps to spread the load. In sandy areas foundations may, for example, be 1000 mm deep, 700 mm wide and stopping 100 mm below ground level. If the earth is somewhere in-between hard and soft then that too is reflected in their dimensions perhaps 600 mm wide and 500 mm deep. 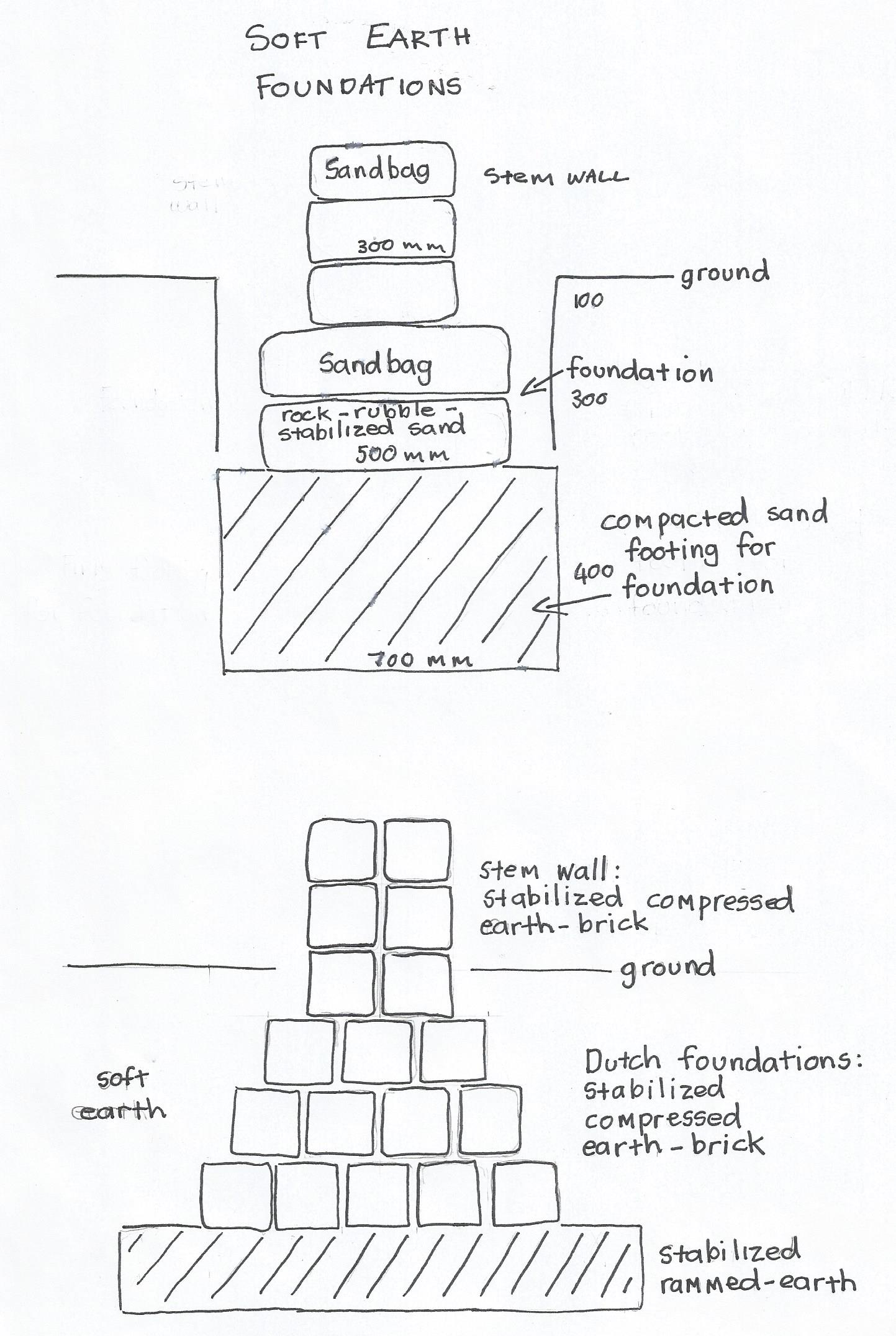 It may be that deeper down there is harder ground and the earth can simply be removed to this point and rammed back in creating a firmer footing on which to begin foundations. Should you have created a firmer footing by ramming the earth then the foundation dimensions can reflect this. It is best to seek a sound footing, but there is a limit to how deep one should be prepared to go to achieve this goal. Should the earth still be soft after one and a half meters then I think it is out of reach as the resources required to reach it, and fill it would be too great. 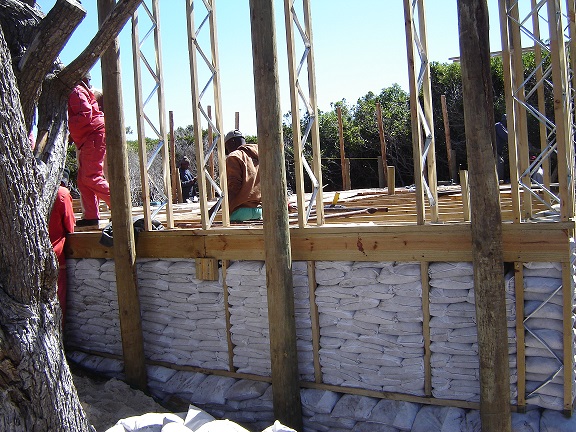 Some foundation types become unworkable in this type of earth, it is unwise to use loose packed foundations, rock or rubble as the load on the foundations will cause the material to migrate down and sideways into the soft sand. However that does not mean you can’t use the same material in a sand-bag to retain its integrity.

The challenge of building on a combination of hard and soft earth is that if the foundations move they will move at different rates which would lead to the foundations breaking apart, affecting the integrity of the whole building. Walls crack, doors jam and water penetrates causing damage. The strategy is to either bridge soft areas or harden them.

Often enough, as an example, hard and soft foundations consist of rock and sand. Instead of forming a flat shelf, the rock penetrates closer to the surface here and there with a layer of sand covering the rest. The sandy layer need not even be that soft, just different to the harder rock so that if there is movement or settling, the relatively softer material will move away from the more stable and harder material. 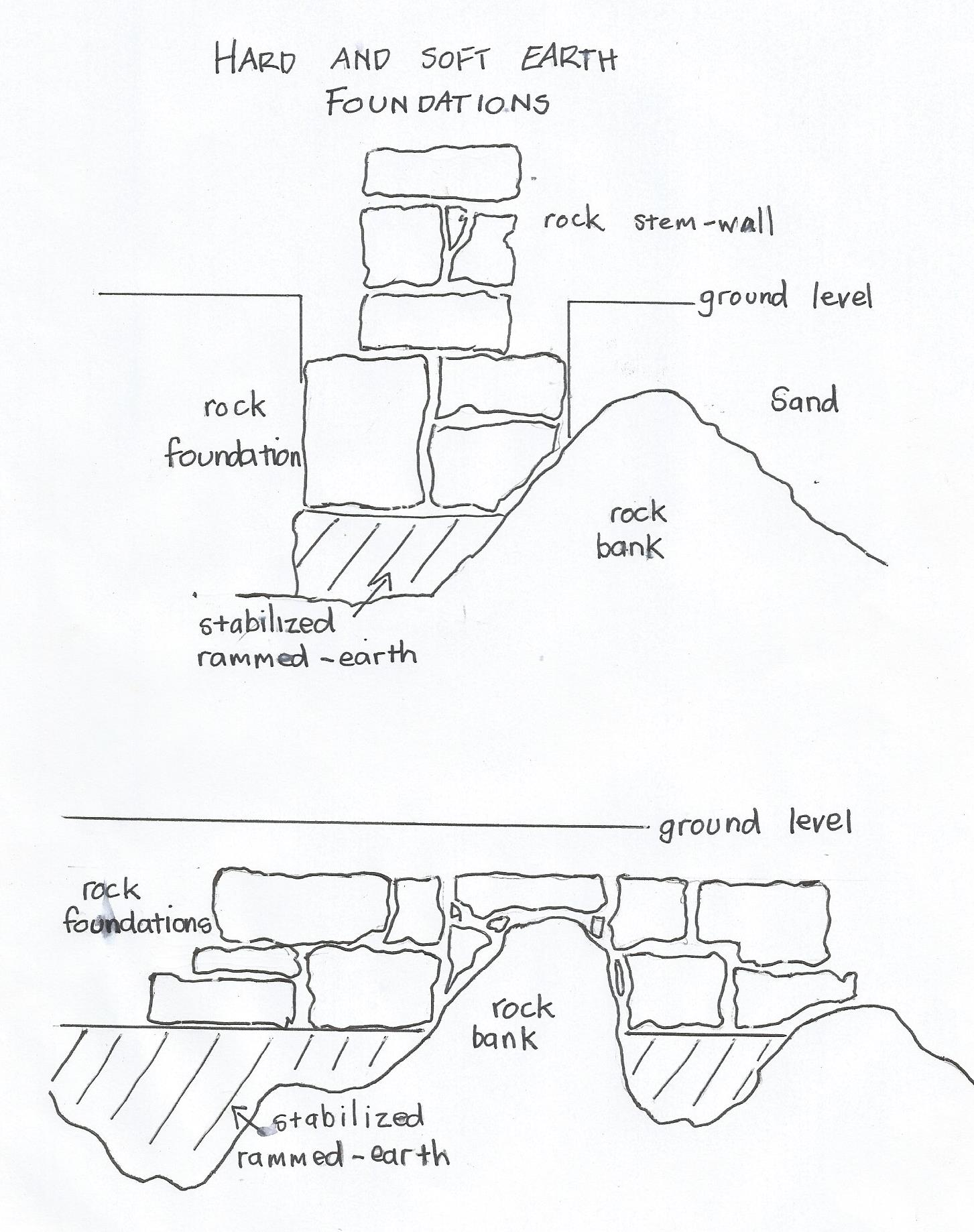 One strategy may be to remove the softer earth between the rocks and ram it back to ensure there is no movement and the foundation’s integrity is maintained. Should the earth not harden with ramming it can be exchanged with earth that does or is stabilized with lime or 5% cement. Earth stabilized with 5% cement typically reaches 4 Mpa or more, which is plenty strong enough to build upon and act at as bridge between the hard rocky areas. 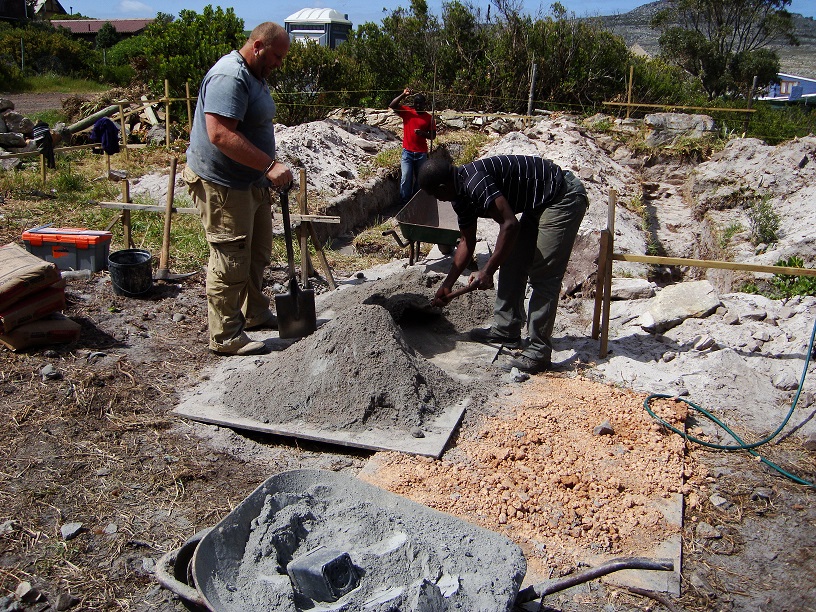 Foundations dug exposing rock and sand. Sand was rammed back between the rocks to create a uniformly hard layer to build the foundations upon (See diagram below). Scarborough, Cape Peninsula.

Because clay earth contracts and expands with water it is the most difficult material to build upon. Not all clays are the same, some hardly move at all while others are very aggressive. Your response will very much depend on the type of clay you have. I have built very standard foundations on clay earth as well as going to some extremes to be successful. Articulated building, i.e. building portions of the interconnected building with independent foundations and walls so that these sections can move individually without damage, is a good strategy.

Tyre foundations in a clay earth: drainage layer of chipped stone, with the first row of tyres stabilized rammed earth, followed by normal ramming of tyres.

In conclusion, informed by the earth you are building on, there are many varied approaches to provide a stable platform to build upon. In natural building there is a saying, you want to give your building a good hat and boots, meaning you want to protect your walls from moisture from above and below. However, in today’s highly visual world we tend to focus on the walls, roof and windows of a building and the design and materials used there. Ultimately though, you want to put careful thought into making the appropriate decision regarding the foundations of your building because the entire integrity of your beautiful cob, mud brick and/or straw bale walls may rest there. Conventional building stresses a uniform approach using concrete and steel that work under most conditions, while a more considered approach using materials with a lower carbon footprint that are locally sought will lead to foundations perfectly suited to their purpose while touching the earth lightly.