In Delft, an impoverished township on the outskirts of the Cape Flats, local government is changing its approach to building early childhood development centres with a pioneering project showcasing a hybrid of natural building methods and up-cycled waste materials.

This post first appeared on Earthworks Magazine in February 2017. We are re-posting it here with the permission of  Young Africa Publishing and author Mary-Anne Constable.

Peter McIntosh, founder of the Natural Building Collective was the project coordinator for the alternative materials (natural and recycled) portion of the Delft ECD build. 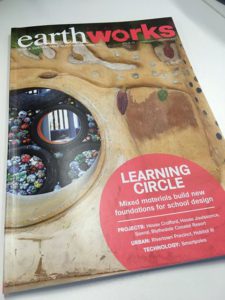 The new Delft ECD (Early Childhood Development Centre) represents the first time that government – in this case the City of Cape Town – has significantly integrated alternative and unconventional building methods for the construction of a public building.

The considered design of the Delft ECD building is an example that will make an essential contribution to the development of South Africa’s youngest residents. The alternative building materials, which include both natural methods (compressed earth bricks and cob) and recycled waste materials (ecobricks, tyres, glass bottles), deviate from conventional brick and concrete, while creating a healthy environment.

In 2013, government’s Presidential Infrastructure Coordinating Commission resolved to use Innovative Building Materials (IBTs) – broadly defined as unconventional building materials not covered by national building standards – for 60% of all social infrastructure buildings such as schools, early childhood centres, clinics and student residences by 2017.

Three years ago City of Cape Town project architect Ashley Hemraj envisioned an ECD built from IBTs. “I realised that if we [the city] didn’t approach new construction from a sustainable point of view, we would continue to get the same results [buildings that consume energy and water, create waste and have large carbon footprints]. So I suggested trying something different – exploring the use of unconventional building materials.” Hemraj says trying new and untested methods is always a risk but with the support of the client, the project received the go-ahead in 2015 and broke ground mid-2016. The centre opens to new learners in early 2017.

The Western Cape government launched its “First 1000 days” campaign in February 2016, which revealed research showing how the first 1000 days of child’s life are the most crucial to their development in becoming a successful, thriving adult able to contribute positively to society. The three most important aspects during this time are health and nutrition, love and attention, and play and stimulation.

Hemraj says from a government point of view, it’s essential to address malnutrition and neglect in impoverished environments. Providing support at this fundamental level offers a powerful opportunity to impact society for good. “If you want to deal with crime, alcoholism, drugs and unemployment, focus on nurturing the child in those critical 1000 days,” says Hemraj. “Forget what happens at a primary, secondary and tertiary level of education, what is needed is a proper developmental foundation.”

Furthermore, children tend to be more open minded when it comes to new technology and innovation – they have not yet learnt what “conventional” means. “Children are highly motivated and they love to participate in recycling activities. They become ‘change agents’ in society because they influence their families and communities,” says Ian Domisse, founder of EcoBrick Exchange (EBE), a non-profit organisation focused on creating environmental awareness, fostering good recycling habits and using ‘ecobrick’ technology – plastic bottles filled with unrecyclable waste like plastic bags, chips packets and food containers – for building in underprivileged communities. About 2000 ecobricks were used as part of the construction of the Delft ECD, primarily for building the internal walls and for decorative artwork.

The site for the new ECD was chosen due to its proximity to the Hindle Road Primary School across the road. Delft was identified as an area of need because of recent growth. The vacant plot was previously used as a waste dump. “We had to clear a layer of 400mm of rubbish when cleaning up the site,” says Shaun Solomons, site foreman from N1 Construction. This included nappies, television sets, car parts and medical waste. Serendipitously, the regenerated site and building now stands testimony to how waste can be creatively transformed into something useful.

The bulk of the building is divided into three individual rectangular blocks, which run diagonally in formation across the site. Each caters for a different age group, namely infants, toddlers and pre-schoolers. Sandwiched between the blocks are two grass courtyards and ample covered and open outside space. An administration block runs perpendicular on the west side of the site, creating a protective entrance and shield for the inside courtyards from the parking lot. Solar panel overhangs shade the edges of the courtyards.

The infant classroom on the north is the largest of the buildings because it needs to provide extra space for cots, and for babies to crawl. “In poverty-stricken areas, many homes are small and have dirt floors, and babies aren’t allowed to crawl freely. But, having a safe space to crawl and experience physical and mental stimulation is essential for effective early childhood development,” says Peter McIntosh, founder of the Natural Building Collective (NBC) and project coordinator for the alternative materials (natural and recycled) portion of the build.

A grassed play area occupies about a third of the site, while the southern corner comprises a large food garden that will provide nutritious meals for the children and an opportunity to learn about permaculture. Rainwater tanks will provide irrigation for the garden. The perimeter of the site is safely secured with a combination of rammed earth tyre construction boundary walls and see-through palisade fencing.

Making earth bricks is a labour-intensive albeit simple task. A team of five construction workers made 200 bricks per day until they reached a total of 4600. Suitable soil was sourced from a sand yard in Somerset West, and stabilised with 7% cement, explains Guy Williams, project foreman (for the alternative materials build) and representative from Los Tecnicos, the for-profit construction arm of US non-profit organisation Long Way Home (LWH).

The rectangular steel-framed buildings are bookended on each side by tyre “walls”, which form a decorative edge. The thermal capacity of the tyre and mud brick walls create an inside environment with a well regulated temperature, as well as healthy learning spaces.

The Recycling and Economic Development Initiative of South Africa (REDISA) donated 4800 discarded tyres to the project. The tyres are packed with earth mixed with rubble and non-recyclable waste, and stacked on top of each other to create a 650mm-700mm-thick wall, explains McIntosh. These are rammed into solid compaction with earth and plastered with a natural cob finish – a mixture of earth and straw.

The other predominant materials used are ecobricks and discarded glass bottles. An interesting juxtaposition between natural and manmade is expressed in the combination of the cob plastering with the tyres, ecobricks and bottles. The ecobricks and bottles are being used to create internal artwork panels between the classrooms, which also have acoustic properties. Packed crossways into a timber frame, they are carefully embedded into the cob mixture, which attaches to the sides of the frame through a technique called “porcupining” – nails sticking out of the timber frame, which help the cob to key-in at the edges. The colourful ends of the ecobricks and bottles are left exposed. Two artists on-site from the NBC and funded by The Sophia Foundation supervised the creation of beautiful free-form patterns in the panels – thus the building itself becomes a work of art.

The labour-intensive nature of the technology created numerous jobs for the local community. The primary contractor, N1 Construction, was required to employ members of the local community through government’s Expanded Public Works Programme.

Many workers have been empowered through the process. Williams says the team working on the tyre construction took immense pride in their work. “They loved being able to use their new skill and were able to run ahead with minimal control and supervision.”

Hemraj says buy-in from the community was essential. They were particularly sceptical of the idea of using recycled waste and trash. “We were trying to create a building that showed them that this kind of building could be better than conventional ones,” he says.

The future for ECDs

The city’s current goal is to provide at least three to four new ECDs a year. The city needs around five to meet the current demand but budgets do not yet allow for that. At present roughly R12.5million is budgeted for each new ECD. As a result of recent budgets for tertiary education being increased, the concern is that less financial resources will be available for foundation learning like ECDs.

Cape Town is working on four new ECDs – one in Strand, one in Bishop Lavis, and two in Heideveld. Although it will take time to refine the process of integrating unconventional materials in public building projects, Hemraj believes this type of building will prove to be the more cost-effective, both to build and operate.

Oliver Wentley, City of Cape Town Social Development and Early Childhood Development programme head, says as far as possible sustainable materials and building infrastructure will be incorporated into the design of future ECDs. “This kind of project [natural/recycled building] is the future for government buildings because children grow up understanding that waste can be useful,” he adds.

We also need to broaden our definition of “cost” to include both social and environmental benefits, not only financial ones. The bigger cost, ultimately, is the cost of not making a change.