A carbon-neutral, multi-purpose centre is being constructed from tyres, rammed earth, recycled building rubble and eco-bricks in the beautiful Helderberg Nature Reserve. 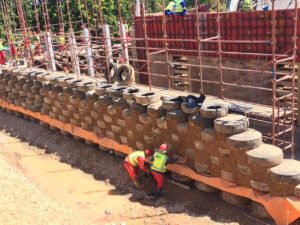 The Natural Building Collective is excited to form part of the construction team building for an eco edu-centre in the Helderberg nature reserve on the outskirts of Stellenbosch for the City of Cape Town and Cape Nature.

The floorplan consists of a large hall, conference facilities, kitchen, and ablutions. The sustainable building materials include tyres, rammed earth, eco bricks, living roof, cob, and natural plasters; as well as a range of conventional materials. The centre will be off the power and water grid, and rely on solar energy and water catchment. Grey and black water will be treated on site.

The building consists of an outer and inner ring. The outer ring consists of just under 1,000 tyres, including truck tyres with a diameter of around one meter and a depth of 315 to 275 mm, and smaller car tyres with a depth of 265 mm. The outer ring allows for the building to nestle into the slope. The inner ring is built of rammed earth forming the walls of a large hall overlooking the Helderberg Mountains and an outdoor stage. 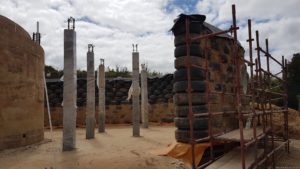 The ablutions, kitchen and boardroom are situated between the inner and outer rings, and the walls will be built out of cob and eco-bricks with lime plasters. Most of the external tyre wall is earth-sheltered and was cobbed before being waterproofed with a torch-on bitumen product. Manhole pipes were used to create two large windows in the tyre wall. The roof will consist of a split level which will allow for a living roof and be open to the public, and will be built using conventional materials. Efforts are being taken to minimise the use of cement in its construction.

The City was able to convince Cape Nature to use alternative materials for two main reasons: first, the design is earth-sheltered and the building is set into the side of the hill with a living roof to blend it into the environment; second, to offset the carbon emissions traditionally used in construction. Visually the alternative materials constitute a large portion of the building, but in a building such as this it is a fraction of the actual work. 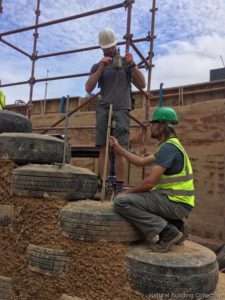 The Helderberg eco edu-centre sprung out of earlier work done by Peter McIntosh and the Natural Building Collective (NBC) in Delft four years ago with the City. As part of its mandate to include sustainable and innovative materials in government projects, the City, under the leadership of Ashley Hemraj, approached the NBC to collaborate in this innovative project.

The NBC did limited design work with the city, and was part of the team in the project design phase with the architects EBISA. The NBC is responsible for the construction of the alternative materials including the tyres, eco bricks, cob, and natural plasters.

The alternative materials followed a rational design process. Peter McIntosh, represented the NBC and provided the expertise for the engineering of the wall including, rammed earth, tyres, and eco-bricks. Paul Marais gave input into the rammed-earth, and William Ruijsch van Dugteren, one of our former natural building course participants, is the engineer for the rational design and alternative materials.

After the design of the building was complete and plans passed, the Construction Company was awarded the tender. The NBC was contracted to build the tyre and eco-brick walls with labour provided by the City of Cape Town through the EPWP (extended public works program) labour program. The EPWP aims to provide work for unskilled, local labour. The Construction company is responsible for the conventional materials, onsite assistance, and the provision of tools and equipment. 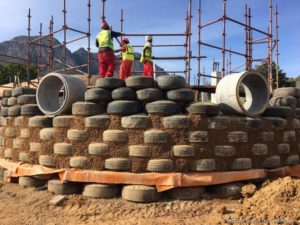 There was a palpable buzz on the site as the tyre wall progressed, and its size became apparent. It is the biggest tyre wall that the NBC has seen. Before construction kicked off, Peter was in Guatemala to facilitate a Green Building Academy for an NGO, Long Way Home (LWH), that first introduced him to tyre building. LWH was going to come to SA to participate in this project, but Peter ended up stranded there for four months because of the Covid-19 lockdown. We did not know when Peter would be back in SA, and thought that the project might need to proceed without him. Fortunately, Darral Petersen was onsite to keep detailed records of the project’s challenges and progress.

In addition, Rob de Barros, a former course participant, acted as site foreman. Rob attended our course in October 2019, and has demonstrated great skill and resolve when construction started in 2020. Building a tyre wall of this scale is very hard work, especially with unskilled labour, and Rob excelled at this task with excellent leadership and team building skills.

The next phase involves the roof construction after which NBC will be responsible for the eco-brick walls, artwork, and plastering. We may put out a call for experienced volunteers to assist with this phase.

We hope that a public building in such a beautiful setting will inspire the public and government departments to use alternative materials in more public projects.